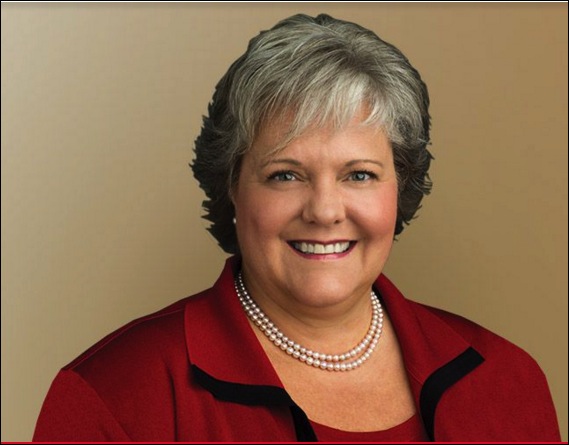 gives her father a lot of credit for laying the foundation of confidence essential in her becoming a “serial CIO.”

“He patiently sat with me and helped me work out really tough math word problems which helped me develop a sense that no matter how challenging something was I could figure it out.”

While his patient encouragement certainly contributed to this confidence, many other things did too!

Patty majored in Math and Statistics at Miami University but she was certainly NOT the stereotypical “math nerd.” Patty was an avid athlete and participated in both theatre and music while growing up. All of these activities played a part in her developing the expansive skill set that has made her an effective business and technology leader.

“Being on stage taught me to get past my nerves” and perform.

A useful skill for anyone and essential in highly visible leadership roles. Sports not only provided early experience in being both part of a team and a team leader but also in resilience; no team wins all the time!

Unlike many women I have spoken with, Patty knew early in her career what she wanted to "be" when she grew up. Even though the CIO position was a relatively new one, Patty identified her goal as this combination of leadership and technology.

After she graduated college, Procter and Gamble (P&G) hired Patty for an experimental data analytics team. These days it’s hard to remember (or imagine) business without data analytics, but in the early 1980s companies were just starting to collect data from scanners. Innovative companies were exploring how to use the big data that they were collecting. Because the data analysis required programming mainframe computers P&G’s innovative group was housed in IT. Patty remarked with unabashed pride that P&G continues to use some of the concepts her team developed then.

When working directly with analytics no longer provided that challenge, Patty consulted with her mentor/boss and determined some next moves. Eventually she worked in every aspect of the business, through the IT side of the house. With each move she relished the challenge and garnered additional skills and perspectives. This deliberate development of her functional and leadership skills prepared Patty for the ultimate job that she had set her sights on early in her career, CIO.

Guiding large organizations as “they learn to pivot” provides Patty with the intellectual challenges she revels in and excels at. Patty began her “serial CIO” journey as a unit CIO at GE progressing to CIO at Quaker Oats, Office Depot and Motorola and ultimately EVP and CIO at Cardinal Health. With each move her domain grew as did the challenges. Never one to shy away from big problems, Patty thrived and honed her leadership skills inspiring change and mentoring talented IT professionals.

Leading, whether it is IT or marketing, is essentially about people. Creating a vision and developing and organizing your staff to accomplish that vision in service to the organization doesn’t vary much based on the function. Patty noted that she is incredibly proud of the more than 20 former employees who now serve as CIO in a variety of organizations. Having mentored this cadre of professionals is one of the most satisfying aspects of Patty’s career.

Patty continues to pay it forward developing the next generation of IT leaders through an active advisory board role at her alma mater, Miami University.

“Universities have an obligation to promote computer science.”

Everyone, regardless of gender should be encouraged to take at least some computer science! Even if some of the coding work is likely to be offshored, an understanding of computer science is a critical skill in the modern global workplace. Perhaps, Patty speculates, girls feeling pressured to be perfect, shy away from hard sciences (including computer science) because of the perceived difficulty.The relative absence of parental and professorial encouragement is another likely culprit. Absence of gender diversity among computer science professors and IT professionals to serve as role models also contributes. Yet there is a significant business opportunity to be gained by effectively harnessing 50% of the population If only corporations and colleges are committed to fixing the gender issues.

Currently Patty holds “the biggest IT job in healthcare,” CIO and EVP at Cardinal Health. Coming to Cardinal Health was no accident for Patty. She had determined that her next role should be in health care. This allows her to be motivated by both the purpose of the company as well as the mastery of the role (to use Dan Pink’s language from Drive[1].) It wasn’t just the industry that attracted Patty to Cardinal Health.

“It was the phenomenal, inspiring leadership team” and the chemistry and culture that solidified the decision.

While exploring the challenges of combining motherhood and leading a large organization’s IT function, I learned that Patty’s passion for tackling big business issues in the healthcare arena was born, in part, by personal tragedy. Patty has been widowed, twice, losing both husbands to cancer. This experience solidified her desire to work with an organization that was making a difference in the world, on a large scale. Cardinal Health does that, both in terms of its core business and its commitment to corporate social responsibility.

Similarly, when Patty identifies resiliency and a problem solving attitude as key characteristics for candidates I cannot help but believe that she too embodies these attributes. An optimistic approach to life, “when one door closes a window opens” combined with a fierce resolve to figure things out make her a formidable leader and problem solver. The concept of “grit” is currently in vogue[2]. Proponents state that leadership depends far more on grit than either intelligence or emotional intelligence. Spending some time with Patty Morrison and it is indisputable that she embodies all three.

Follow us on Google+
Tweet
Tags:
leadership CIO STEM Women in IT Skills Grit
"Great Leaders are good at filtering out bad noise...
"To become a trusted advisor, first listen, then l...

No comments made yet. Be the first to submit a comment
© Copyright 2021. PAKRA, LLC. All Rights Reserved.